The initiative of the Pole of Quantum Technologies was born with the ambitious objective of placing Galicia as a reference in quantum technologies by 2030.

Quantum technologies, and specifically quantum computing and communications, are part of the emerging and disruptive technologies with a very fast evolution and with many different alternatives (superconducting qubits, trapped ions, neutral atoms, etc.), without any having reached a dominant position towards the future. For this reason, it is important to maximize the number of quantum computing technologies available in the infrastructure.

The results that are intended to be achieved with this first action are:

– Deploy the minimum infrastructures necessary for the creation of the Por el R + D + i in quantum information technologies, combining several of them and resulting in the positioning of Galicia in a leadership situation in this disruptive technology.

– Position the research, technological and productive fabric of Galicia at the forefront of this innovative technology with a great future, which will facilitate access to new leading national and international projects and the creation of new innovative products and services.

– Facilitate a better recovery from the crisis, achieving a lasting effect on the digital transition and on the competitiveness of companies in the region and maintaining highly qualified employment.

– Support the digital transition of the Galician knowledge and production sectors and, specifically, serve as a lever for strategies with digital components that are already in place and implemented, which require technological evolution.

For this, the Pole of Quantum Technologies will deploy an infrastructure composed of several subsystems including:

– A Classic Quantum Algorithm Simulator: It is a quantum algorithm simulation infrastructure composed / composed of a classic computer specifically designed for the emulation of quantum computers and software adapted to it.

– A quantum computer: It will be a quantum computer based on European technology. Its capacity, due to the rapid evolution of existing systems, is estimated to be between 20 and 100 cubits.

– A High Performance Computing (HPC) and Storage System, exclusively for quantum computing: These systems of the infrastructure of quantum technologies will have a configuration similar to that of a classical supercomputer. It will be composed of several computing nodes, communicated by a low latency network between them, and with direct communication links to those of the previous systems.

– An access front that facilitates its use by different companies, entities and research groups.

The objective of these infrastructures is to allow the development of algorithms and real applications that use native quantum computing or mixed or hybrid computing, where part of the algorithm is classical, and another part is quantum. It can also be used in the development of classical quantum-inspired algorithms. The infrastructures will also have sufficient capacity to store the data of the results of the execution of the different experiments that allow their subsequent analysis.

This activity is mainly focused on carrying out research and innovation projects that allow the digital transition to the bias of the use of quantum technologies deployed in activity 1. These R + D + i projects will be focused on:

– Improvement and integration of the infrastructures deployed in Activity 1.

– Use cases of interest in the strategic sectors of Galicia or in other sectors where the application of quantum technologies may have shown an advantage over the use of classical techniques.

– Development of a set of quantum hardware and software evaluation programs (benchmarks).

Activity 3: Implementation planTo guarantee the future evolution of the program and its sustainability, studies will be carried out on:

– Quantum technologies plan that evaluates the international and national environment,

A series of communication, dissemination and training actions related to the use of the deployed infrastructures will be deployed with the following objectives:

– Publicize the agreement and the importance of quantum technologies both to the research community of the Galician University System, research centers and companies and to society in general.

– Train users in the infrastructure deployed for efficient use.

– The Quantum Technologies Plan has been finished.

– Publication on July 8th, 2022 of the public tender CTS-2022-0005: Supply of an infrastructure based on quantum information technologies eligible for financing by the European Union within the framework of the REACT EU Axis of the FEDER Galicia 2014-2020 operational program, as part of the European Union’s response to the COVID-19 pandemic.

– Opening of envelope A of the aforementioned tender, on August 11th, 2022.

– Recruitment of additional personnel, who joined CESGA between March 21st and June 7.

– Hiring in November 2022 of two research subcontracts in benchmarking and access interfaces.

– Presentation of the Quantum Technologies Pole on July 15th, 2022. 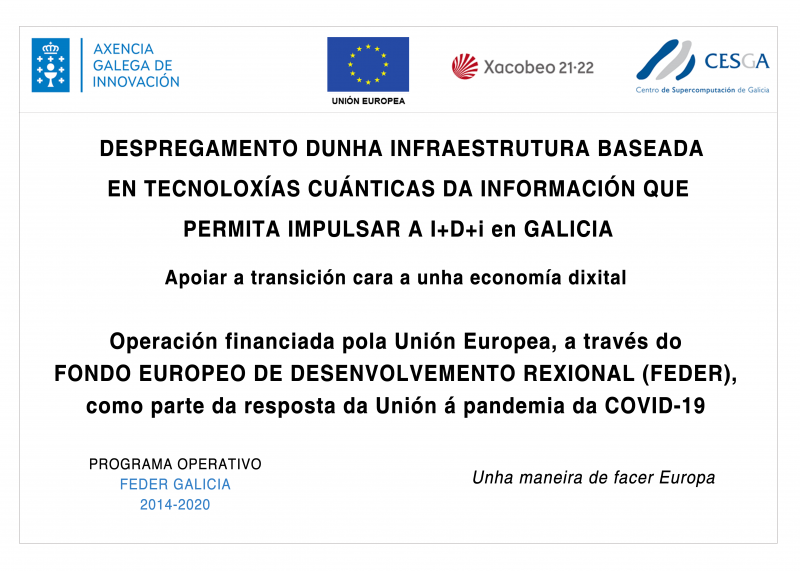 Cookies are sent to your device and managed exclusively by us for the best functioning of the Website. These are intended to preserve session data and language choice.